You can split your Current/Backlog panel into separate panels, or recombine them, by clicking the Panel actions menu at the top right of the panel and selecting Split current & backlog or Combine current & backlog. 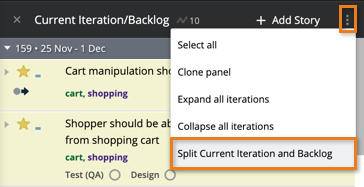 Tracker automatically moves stories from the top of the Backlog to the Current iteration for you based on project velocity. For example, if your project’s running velocity is 6, Tracker will move 6 points’ worth of stories to the current iteration, because that’s what is projected to be completed.

“Filling up” the current iteration

Once your current iteration has stories with a total point value that is equal to or greater than the current velocity, any estimated stories that exceed your project’s velocity (and those that follow them) will remain in the Backlog. Unestimated stories, such as bugs and chores, can continue to be planned in the current iteration as long as the total points in current have not yet exceeded your current velocity. When you click Start on a story in the Backlog, it will move to the current iteration regardless. However, don’t start a story until you’ve actually begun working on it. (Note that when you click Start, you become a story owner).

“Filling up” future iterations (the Backlog)

For example, let’s say your Backlog contains stories with an overall value of 32 points (with each story estimated at 2 points each), along with a current project velocity of 8. Tracker will try and ensure that each 2 point story is placed in an iteration in which it can be completed; so you would see your stories broken up across 4 iterations, containing 4 stories each, as shown in the image below. 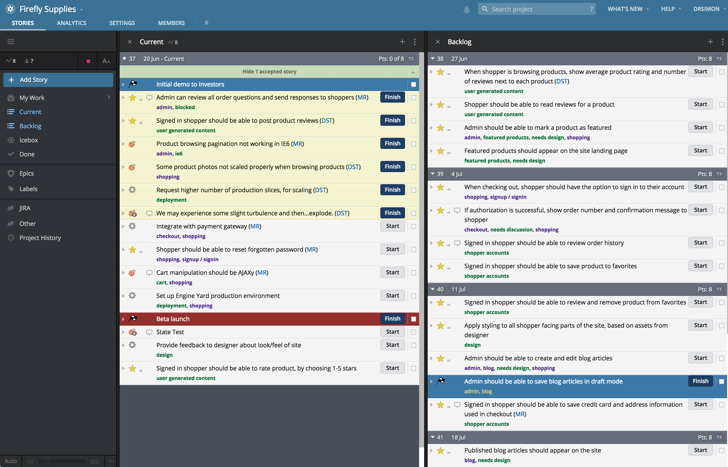 However, more than likely your stories will have varying estimates, in which case you may see an iteration that contains fewer points than your current velocity value, while the next iteration contains more. This occurs when Tracker estimates that you will have started a story in one iteration, but won’t have accepted it until the next one, as shown in the image below. 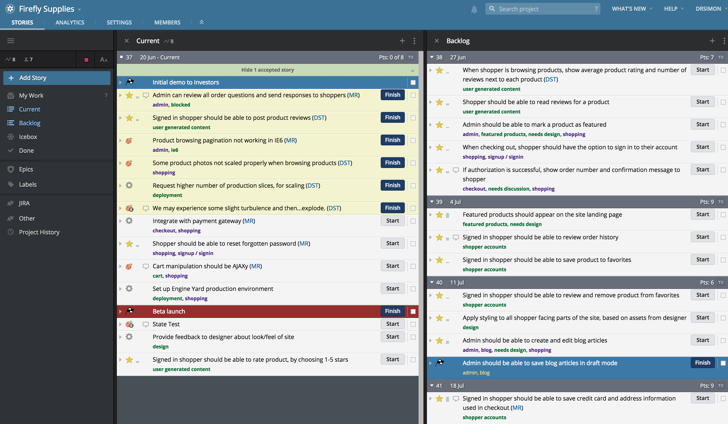 Additionally, as you prioritize and move stories around in your Backlog, you may notice stories move out of one iteration and into another —this is Tracker readjusting what can be completed in that planned iteration based on the the priority order of your stories and their individual estimates, compared to the current project velocity.

Tracker does not have any concept of ‘negative iteration capacity’. For instance, if your Velocity is 10 but you have 100 points worth of started stories in Current, Tracker will still assume that 10 points can be completed in the following iteration.

Moving from Current to Done 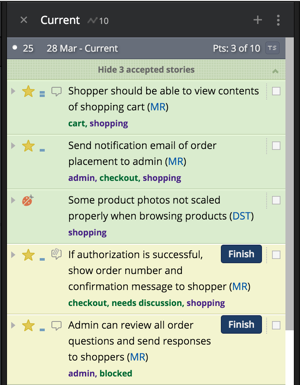 You can click Hide accepted stories at the top of the current iteration when you’d like to focus on the remaining stories to be done.