The following diagram illustrates Trackers workflow based on story states and Reviews. 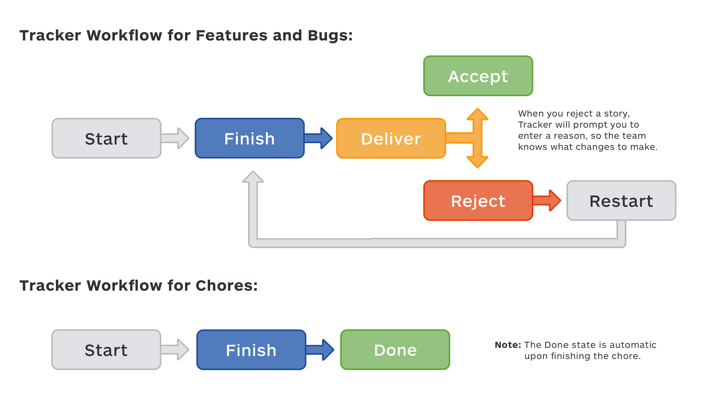 In the Getting Started guide, the Workflow overview article walked you through a simple workflow example. Let’s look at a more detailed example to help you tailor Tracker’s workflow to best fit your team’s needs.

A story in the life

Here’s the life cycle of a typical Tracker story: 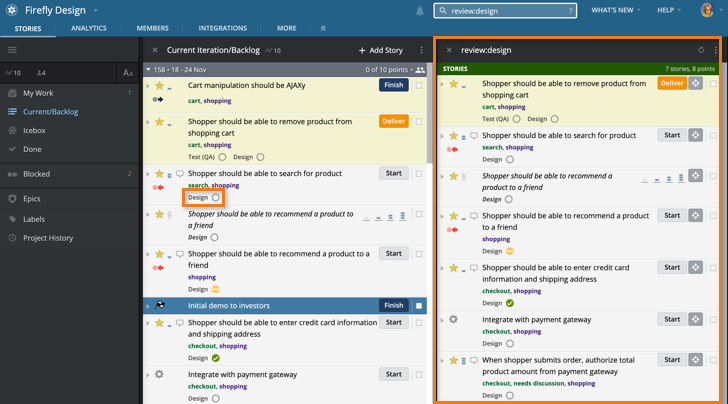 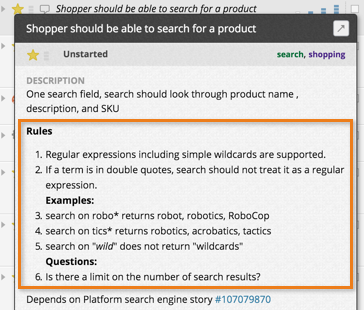 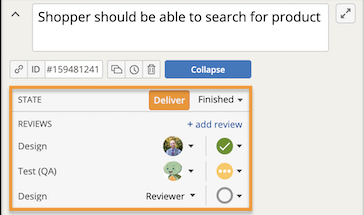 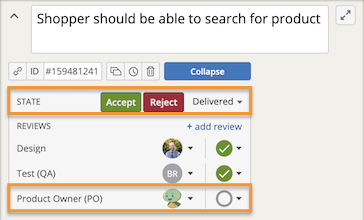 The My Work panel will show all stories in Delivered status (i.e., ready for to be accepted or rejected) for which you are the requester, so you can easily see which are ready to accept. 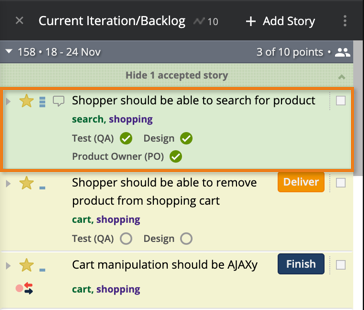 How is your team doing?

All stories are not created equal. Straightforward ones may be accepted within hours of being started. With more complicated ones, we may find that some rules were missed or the feature can’t quite be implemented as designed after all. Clicking that Reject button may sound harsh, but it just means there’s a bit more to be done, and iterating a few times is sometimes necessary. When rejecting a story, add comments with details about why it was rejected, including screenshots and any other useful information.

Watch the Cumulative Flow chart to see story states by day during the iteration. This helps identify problem areas such as falling into a “mini waterfall” scenario, with no stories being completed until the end of the iteration.

Tracker provides a way to let you manually plan the current iteration. Check out the Automatic vs. Manual Planning section in Using Projects.

As noted in the Getting Started article on Tracker’s workflow, bug stories follow the same workflow as feature stories. However, bugs sometimes follow different paths. You may want to preserve the information in a bug story, even if the team isn’t going to do any work specifically on that story.

Your team may decide not to fix a particular bug. When this happens, teams typically mark the bug story accepted, and tag it with an appropriate label, such as “wont fix.” It’s always helpful to add a comment describing the reason.

An issue reported as a bug may turn out to be a missing feature, or it could be expected behavior. You might prefer to change the story type from bug to feature. Or, you could tag it with a “not a bug” label and change the state to Accepted.

While fixing bugs as soon as possible is a good practice, sometimes a bug story may linger long enough that it is fixed by a different story. An option is to comment on what was tried then tag it with a “not reproducible” label and change the state to accepted.

Tips for using Chores and Releases

Chores are stories that are necessary but provide no direct, obvious value to the customer (e.g., “Update SSL Certs”). Because they don’t typically require extra validation when they’re finished, the states for chores are just unscheduled (when in the Icebox), unstarted, started, and accepted.

Releases are milestone markers that allow your team to track progress toward concrete goals (e.g., stakeholder or investor demos, software launches, etc.). It’s possible to specify target dates for releases. All stories for a milestone or release should go above the marker for it. Releases are automatically placed in the started state upon being created or dragged in the Backlog, and also have the unscheduled (when in the Icebox) and accepted states. For more please see Organizing releases.